The silver city of India, Cuttack, is the second largest city of Odisha. Previously 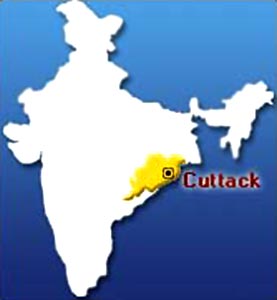 it was also the Capital of the state which later on was shifted to Bhubaneswar but it is still the judicial Capital of the state as the Odisha High-court is situated at Cuttack. The city is said to be the commercial capital of the state as most of the small and large business houses of Odisha belong to Cuttack only. The city is also known as the millennium and the Silver city of India as well. Due to the world famous filigree work done on the silver ornaments and jewellery. The ivory and the brass work being done along with the textile industry of the state have brought it into the lime light. May be Cuttack is the most chosen place for shopping all over the state.

Cuttack has a long history. The name Cuttack is being derived from the Sanskrit word 'Katak' which means The Fort or a Government seat which is being under protection of the Army. There is a famous Barabati Fort in the riverside of Mahanadi and around which the entire city has been developed and this has been the reason behind its name.

Cuttack was founded in the year 989 A.D. by the Keshari Dynasty. Reason behind forming this city was to home the armed regiment responsible for guarding the entire dynasty ruled by the King Nrupa Keshari. As per the historical evidences which are mentioned in Madalapanji, a chronicle of Jagannath Puri Temple Cuttack has witnessed several dynasties after the Keshari dynasty. Cuttack was the capital of the kingdom which was founded by Emperor of Ganga Dynasty which was ruled by Anangabhima Deva. After the banishment of the Ganga dynasty Cuttack was ruled by the Gajapati Kings of Solar Dynasty in 13th century A.D.

It went under the rulings of Mughals and the Muslim Emperors after the last Hindu King of Odisha, Raja Mukunda Deva. By the mid of 16th century the ruling of Cuttack came under the Maratha emperors. It then turned to be one of the most important business centres as it was the most suitable for the businessmen of Nagpur and the English merchants West Bengal. In the early 19th century Cuttack was captured by the British and was declared to be the capital for the Kalinga division. Kalinga was the earlier name of Orissa, which was then changed to Odisha. By the time India got its freedom from the British rule in 1947, the capital of Odisha was being shifted to Bhubaneswar in 1948 as it was a planned city but Cuttack was still the administrative headquarters of the state.

As Cuttack being an unplanned city is a gathering of several streets and lanes and that has given it another name which is most familiar locally. Babbana Bazaar, Teppana Galie which means 52 markets with 53 streets.

In the last few decades Cuttack has developed immensely, to be mentioned, the extension of the city across Kathjori River and establishment of a completely new township over it. The township is based on some 2000 acres of land and is being developed by the local governing body called Cuttack Development Authority (C.D.A). The newly formed township has some 15 sectors presently and of which 11 sectors are already being occupied to a good proportion. The Barabati Fort built in the ancient time has been renovated and has become a centre of attraction for visitors.

Geography and Climate of Cuttack

The city of Cuttack is located at 20°30' North Latitude and 85°49' 60'' East Longitude. Cuttack is located at an average elevation of 36 meters above sea level. The Physiography of Cuttack explicates that the city is located at the apex of the delta which is formed by the River Kathajori and River Mahanadi, the both of this important rivers flow through the territory of Cuttack. The geographical study on Cuttack reveals that the city has a tropical climate and the weather remains hot and humid during months of summer which are from March to June. The temperature become cold during the winters and the city also experiences monsoon season between the months of July and August. Records say that Cuttack experiences around 144.39 centimeters approx. of rainfall during monsoons. The most suitable climatic condition to live in the city is between the mid of January and the beginning of March. The climate of Cuttack remains very pleasant during this period.

The economy of Cuttack is mostly based on the agricultural activities. About 76% of total population of the entire district depends on agricultural sector for their livelihood. Since the rivers of the state are rain fed many a times the cultivators and farmers have to upon the irrigation. Majority of the crops cultivated are the cash crops and are also exported, which adds up to depend the economy of Cuttack on a large scale. Cuttack is said to have the largest GDP among all other cities due to the presence of big business houses and industries like, steel, logistics, alloy textiles and handicrafts. The presence of Paradeep port which is almost 80 km from the main city of Cuttack also facilitates the business of the city and connects it with several international businesses.

Culture and Language of Cuttack

The city of Cuttack is also known as the Cultural capital of Odisha. The present capital of the state, Bhubhaneswar and Cuttack are said to be the twin cities of Odisha. Cuttack is much peaceful city than any other irrespective of the presence of followers of several religions in the city. Oriya is the official used language in the entire state of Odisha. Affected from its closest state, West Bengal the language of both the state has certain similarities. The Oriya language has certain words that are similar in other languages as well, like Bengali, Bihari and Jharkhandi. The Oriya literature has its roots from the 13th century. Sanskrit is the mother language of the written Oriya format and it follows the same spelling format as that of Sanskrit.

Cuttack, being the former capital of Odisha, also holds the distinction of being one of its oldest towns. The city has witnessed several dynasties and rulers ruling over the state. From the Keshari Kings (who are said to be the founder the city) to the Mughals, then to the Afghans and later on to the Marathas. Finally, it came under the rule of British Empire, which gave it the status of the capital of Orissa. Cuttack is one of the most visited cities of South Eastern coastlines of India due to the large number of tourist attractions and excursions it offers.

Generally there is a saying about Odisha that, it has 13 festivals in 12 months of a year. Cuttack is no way excluded of this fact. The entire city gets energetic during some of the major festivals like the Dussehra, Durga Puja, Ganesh Puja, Kartika Puja and Rajo festival. It is not just that Hindu festivals are being celebrated at a bigger level but also several Muslim festivals such as Eid and Muharram are also being celebrated with equal excitement. And, so is the Christmas and New Year being celebrated with the same spirit. Cuttack is a home of people belonging to several religions and hence it witnesses all sort of Indian festivals with great attention.

Oriya people prefer having a diet inclusive of both Vegetarian and Non- Vegetarian dishes. Cuttack is famous for some of its special dishes which include the food items in the vegetarian list such as the famous Dahibadas Aaludam and Chaat. The non-vegetarian food items list includes Fish Curry, Mutton Curry, Chilli Fish Fry. Sweet dishes made of the Milk products are very famous along with the Rasgullas. Pahada is a place which is 12km form Cuttack is famous for the Rasgullas all over the country and also exports these Rasgullas to foreign countries.

How to Reach Cuttack

The former capital of Odisha witnesses a number of tourists every year and hence it is well connected to the rest of India by all major medium of travels.
Reach Cuttack By Air – The Biju Patnaik international Airport at Bhubaneswar and is the nearest airport to Cuttack. Everyday several flights connect the city to various major cities of the country and now it has become an international airport that also has direct flights to several major international destinations.
Reaching Cuttack By Rail/Train – Cuttack being on the main line of Chennai and Kolkata route observes a plethora of superfast trains operating from here that connects the city to  rest of India.
Reach Cuttack By Road – The national highway number 5 connects the Cultural capital of Odisha with rest parts of the state as well as the country. The smooth highway witnesses a regular traffic of several public busses and taxis that connects it with other cities.