The Word ‘Bali-Jatra’ is an Oriya word which literally means journey to Bali. In Ancient times the Oriya merchants use to travel to the South Asian countries; Bali, Java, Sumatra and many more through water routes for the sake of business. The Bali Jatra festival is a symbol to memorize the same golden era. This is also a festival of boats and is also known as the ‘Boita Bandhan Utsav’ where ‘Boita’ is the word which means a form of boat. The sailors used to start their journey on the Kartika Purnima and they use to travel in these ‘Boitas’ to the South-Asian countries to do business and return back to their motherland. 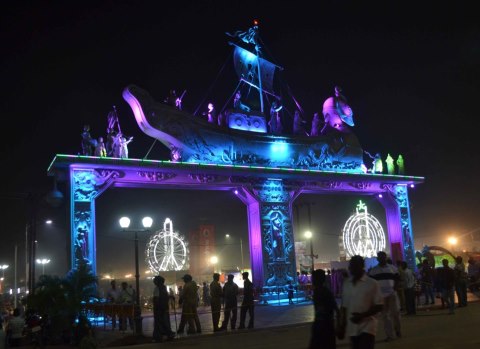 Importance of Bali in Cuttack

Bali was the most favored market of the Oriya merchants who visit there to do business. The trade with Bali started much before the Christian era. Bali had several attractive products which were the point of attraction for the Oriya merchants including long pepper, pearls and gems, bees wax, silk, sandalwood and cardamom. Bali has several products like the rugs, jewelry, gold and fine cloths which were brought into the India by these Oriya merchants only. As per the history the first ruler of Bali around 7th century was an Indian whose name was Kaudinya. Bali has always been very influential factor for the culture of Odisha. There are several similarities between two cultures and the life-style of the people of these two countries of that time. By the end of 8th century trade between Bali and India also ended but yet the Bali Jatra festival is being celebrated in that memory.

Celebrations of Bali Jatra in Cuttack

The festival of Bali Jatra is being celebrated for seven days and it begins on the Kartik Purnima every year. Huge gathering of people of all age groups collectively perform the task of releasing the handmade boats of paper and cardboard symbolizing the journey of the sailors in ‘Boitas’.

During the long seven days lasting Bali Jatra festival several stalls of various good, groceries, handicrafts and many other products use to set up forming a huge fair. It is basically an open air event which is being celebrated at a huge ground which is known as the ‘Bali Jatra Ground’. The ground is situated near the Barabati stadium and is extended to the bank of Mahanadi River at Cuttack.

Attractions of Bali Jatra in Cuttack

There are several special arrangements being done in order to make the people visiting the fair to have a great experience. For kids there are various type of Joy rides are being set up. Hundreds of stalls that exclusively see the toys for children are also being set up during the fair. Food items of various types are also a centre of attraction in the Bali Jatra. Especially the Cuttackia food varieties which include the famous Dahi-wadas and the Thoonka-Puri. Products of all variety, starting from pen to cars are being displayed during the Bali Jatra and the statistics says that the sale of these items increase to huge extent during the festival if the stalls of these are being catered here.
The tourism department of Odisha offers various special schemes and tour packages to visit Odisha during the festival of Bali Jatra. This is the best platform to demonstrate the rich heritage and culture of the state to rest of the country. The Bali Jatra festival is attended by lakhs of people every year and is a mark of fun and enjoyment for the residents of Odisha.