As per the plans of the tourism department of the state the old Gadakhai, an ancient monument inside the fort who has its remaining portion still left. It will be transformed into a world class tourist destination with boating facilities and a park for all age group people. The renovation work of the Gadakhai has already commenced. Systematic exploration, excavation and research will definitely throw more light about the antiquity of this ancient township. 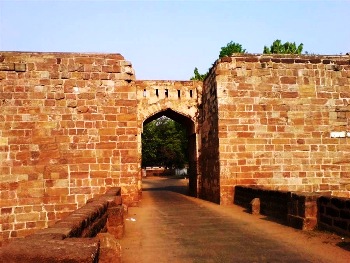 The fort is built up on a square plan and it is spread over an area of 102 acres which is surrounded by stone paved moat on all the sides. The moat of 10 Meters on the northern side and western side, 20 meters wide on the eastern and southern sides are constructed. It is believed that the entire fort wall except the entrance is missing.

In and Around the Fort

Due to the national importance of the fort since 1915 Archaeological Survey of India has declared the place as a protected site. Right at the centre point of the fort a high mound can be noticed with a tank in the western side. It is spread over 17 acres of land. On the eastern side of the mound a Shahi mosque is situated and the mazar of Hazrat Ali Bukhari lies on the west side of the tank. Presently the site of the fort is extensively intruded. In 1989 Archaeological Survey of India carried out excavations in order to discover the cultural horizon of the historic fort and that work is still being carried on.

Rulers Who Had Their Rulings from the Barabati Fort During the reign of Anangabhima Deva III first Muslim invasion of Barabati by Ghiyasuddin Iwaz Shah, the Sultan of Bengal took place. The frontier outpost of Lakhnor in Birbhumi was occupied by the Muslim forces. Later on under the command of his brotherin- law Paramardideva a large troop attacked Lakhnaor, capital of Muslim Bengal. The Orissa army achieved a great success but lost the Paramardideva in the battle field. In his memory his wife Chandrika Devi built the Anantavasudeva temple at Bhubaneswar.

Illyas Shah of Bengal invaded North Orissa in the 14th century A.D. and in 1361 Sultan Firuz Shah Tughluq invaded Orissa and occupied the Barabati fort. With a rich booty he returned to the national capital, Delhi. During the rule of Bhanudeva IV in 1421, Sultan Hushang Ghori of Malwa visited Cuttack in the guise of a merchant and overwhelmed the King. King Kapilendradeva overran the King and established the Surjyavamsi rule. His son Purusottamadeva brought the image of Lord Gopal from Andhra and enshrined that in Barabati fort.

Barabati fort has been described as girdle of the earth goddess by Prataprudradeva. Kalapahad attacked the fort in 1568 and from then the fort became the undisputed seat of the Afgans. In 1975 the general of Akbar Muni Khan defeated Daud, son of Suleman Karani. In this glorious Barabati fort itself Doud Karani surrendered to the powerful Mughal forces. Mansingh was sent by Akbar to suppress Afghan uprisings in 1952. Ain-e–Akbari depicts the graphical account of the Barabati fort which also states that Cuttack had a strong fort, and is the residence of the governor and also contains some of the finest buildings of the state.

A nine storied building was built by the Chalukya king, Mukunda Deva in 1560 AD. Several celebrities have visited the Barabati fort in the history. The son of Raja Todarmal, Raja Kalyanmal was governor of Cuttack. The rebel son of Jahangir Prince Khuram also visited the fort.

Excavation by The Archaeological Survey of India

Antiquities Found During the Excavation

Several ruins of a temple have been excavated and that are some of the most notable finding of the Barabati fort. It is believed that the temple of Jagannath which was known as Purusottama at that period was built by Anangabhima Deva III who built the fort. It is believed that Firoz Tughlaq destroyed this temple during his invasion in 1361. Some of the grand pillars of the palace have also been yielded during the excavations.

The skeleton of a royal elephant is said to be excavated recently from the site. One of the oldest construction works of the history discovered at the Barabati fort was the portion of a temple with 3 mouldings at the base level on the foundation. No living being remainings or deposits were reported to be found where the temple stood. Although some findings of a few pottery specimens which were of believed to be of the 13th century A.D were found during the excavations. The sculptural remaining which was recovered from the site of the fort has been believed to have a very close semblance with the proto-type of the magnificent Konark sculptures. A few fragments and some pillar ruins were excavated where as the structure was fully destroyed.

As per the Excavation done by The Archaeological Survey of India some Thirty two pillars have been noticed which belongs to the two building phases. As such a few evidences of repair works have also been noticed.

Britishers occupied Cuttack in 1803 and extensive stone robbing took place in order to build the Cantonment Road near the fort. Even now the Archaeological Survey of India has partially excavated the site and it is believed that after the completion of excavations a brief history of Barabati will be revealed which can also throw light on the history of Cuttack and Odisha as well.