Bhattarika Temple is one of the famous Hindu pilgrimage locations of Odisha which is situated at the Sasanga village near Badamba, at Athgarh, an area under the jurisdiction of Cuttack District. The temple is located on the banks River Mahanadi and is dedicated to the Goddess Bhattarika, which is also said to be an incarnation of Goddess Shakti. As per the mythology when Parshurama (an avatar of Lord Vishnu) got defeated by the Saharasjuna many a times, he then prayed to Goddess Durga by mediating on a stone. The Goddess delighted with his meticulous appeal appeared and gave power to Parshurama. With the divine power rejuvenate in Parshurama, he defeated the Saharasjuna. The place where Goddess appeared is said to be the location where now the Bhattarika Temple is being situated. The Bhattarika Temple is also entitled ‘Shakti Pitha’ which means the native place of Goddess Shakti. It is believed that there are some 52 Shakti Pitha are there in various part of the sub-continent India. 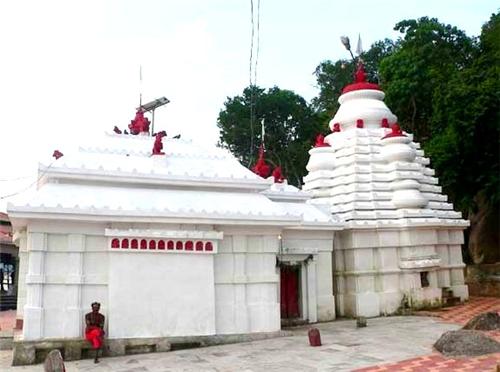 The Bhattarika Temple is believed to have been built between the 6th to the 16th century B.C. As per the legends this Shakti Pitha at Bhattarika was established by Parshurama. He also carved the idol of Goddess Bhattarika at the tip of his arrow. He was blessed with powers which he attained by worshiping the Goddess Durga after he lost the battles against Saharasjuna. The temple of goddess Bhattarika is also believed to have its connection with the Oriya Ramayan. According to the Oriya Ramayan, God Ram, Laxman along with Mata Sita worshiped goddess Bhattarika while they were travelling to Panchavati. On the other side of the River Mahanadi, now also the foot marks of Sri Ram, Laxman and Mata Sita can be found.

There is also a story behind the name of the place where the Bhattarika Temple is located i.e. Badamba. As per the legend of Badamba, once the Gajapati of Orissa ordered Hattakishor and Mallakishor the two famous brothers who use to craft the entire city, to establish two villages named Mahuri and Sankha. Later on they became the king of those villages and when they tried to construct a Fort in their villages a chief of a tribe opposed them and that resulted into a huge battle fought between the king and the tribe. In the battle the tribal chief died and before the his death his wife advised the Gajapati to worship Goddess Bhattarika. Bruhatamba is another name of Goddess Bhattarika and hence the Gajapati decided to name the place as Bruhatamba. Later on the name was changed to Badamba which is still the same.

Legends Associated With the Bhattarika Temple

There is also a famous belief that at the time of Bhaumakara rule in the State of Kalinga, the particular place where the Bhattarika Temple is located was associated with Tantric Buddhism. It is also said that the images in the temple are converted into the Hindu fold by the Somavamsis who were believed to be the strong enemies of Buddhism. Although the tiny Buddhist image is still placed in the central niche after so many decades passed. The present Tara image also appears to be of a later insertion and not of ancient times.

In the interior of the Bhattarika Temple there are eight small images of Goddess Bhattarika are present. Of these eight, three are in the Lalitasana holding a lotus in one hand and Varadamudra in the other hand, and all the other five are in padmasana. An image which is also in the Lalitasana has Pasha, Bow, Arrow and Ankusha in her four hands and hence it is known as Para Bhattarika. She is said to be the ‘suryopasanatatpara’ and in the Jagamohan of the Bhattarika temple God Sun is being worshiped. The images along with the Goddess Bhattarika are Prabha, Jaya, Maya, Sukshma, Suprabha, Abhaya and Visuddha. As per the Buddhist "Yogachara" system, Devi Bhattarika is being seated in the center of Chakra associated with all the eight deities. The priest worships the goddess as Mahamaya, Rajarajeswari, Tripura Sundari, Shodashi, and Para Bhattarika. Several history scholars opine that the place has a link with Buddhism.

Places of Interest near Bhattarika Temple

There are a few other famous temples near the Bhattarika Temple which are the temples of Nilamadhava, Vindhyavasini, Narayana and Simhanath.

It is said that another meaning of the Devi Bhattarika is "respectable lady." Hence the temple is being of a great belief for the local people and several tourists visit the temple every year during the Dussehra. The Bhattarika Temple is believed one of the best places of Orissa and also as per the mythology it is also one of the Shakti pitha in Orissa.

How to Reach Bhattarika Temple

The Bhattarika Temple is at the Athgarh sub-division of Cuttack district which is lies between Narsingpur and Cuttack. While coming from the Gopalpur region if moving 6-7 kms more to the southern side there is Sasanga Gram which is near the Ratnagiri Mountains. In the foot of the Ratnagiri hill the holy Bhattarika temple is located. While crossing the forests on the way to Bhattarika it is said that that due to the divine feeling that tourist experience makes the soul rush forward to the spiritual union with nature and the Divinity.


Explore more about Tourism in Cuttack