The Katak Chandi Temple is one of the most ancient temples of Odisha which is located nearby the banks of river Mahanadi. Hundreds of devotees visit the holy Cuttack Chandi Temple and this number increases to even thousands during the auspicious Durga Puja. Goddess Chandi is believed to be the Living Goddess by the mass of Cuttack and is said to one of the forms of Goddess Durga. The temple has the idol of Goddess Chandi which is also named as Maa Katak Chandi, has four hands holding Ankusha (goad), Paasha (noose), gestures dispelling fear (Abhaya), and granting boon (Vardaan). Goddess Chandi is being worshiped everyday by the priests which are known as the Sevayatas who belong to the Brahmin community. 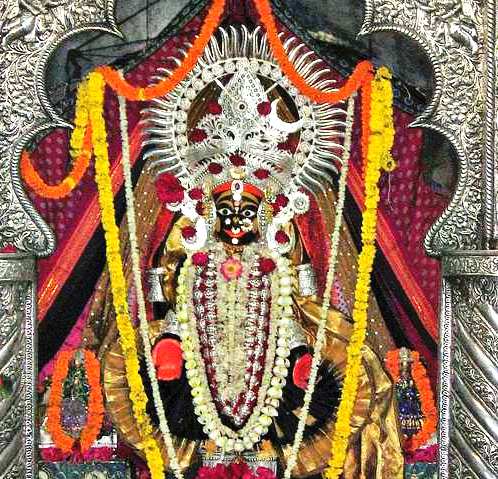 As mentioned in the historical books the place where presently the Temple of Goddess Chandi is situated was once a land used for nothing. The founder of the temple Late Shree Hans Panda, who was the purohit of the King of Kanika at that time used to graze the sheep’s and cattle’s on that land. One day Sri Panda while making the cattle’s and the sheep’s graze, felt unusual and hence he rested on the dry mud over there. There he experienced very uncommon feelings within himself. The same sort of feeling he had that night and Goddess Chandi appeared in his dream and asked him to take her out of that land.

On the next day he immediately went to the king and spoke all that he witnessed. With the permission of the king digging of the land commenced and it is believed that some forty bullock carts of red Sindoor came out of the land and finally emerged the idol of Maa Katak Chandi. Later on the temple was built on the same piece of land. It is also believed that in the medieval age during the rule of Gajapati Kingdom, Maa Katak Chandi was the family deity of the dynasty. And due to the non – Hindus attacks she was being buried under the ground and kings migrated to Puri.

The High Court of Odisha declared the Last king of Kanika Raja Shriman Shailendra Narayan Bhanjadeo as Hereditary Trustee of the temple. The family of Dayanidhi Panda vested as Hereditary Sevaka.

The High court again crafted a scheme in order to manage the temple administration. A management board was formed which had several reputed personalities of the city along with a few top government officials. The function of this board committee was to watch after the functioning and decision taking regarding the temple activities. An Executive Officer was also been appointed by the commissioner of Cuttack to look after the functions of the temple.
Best time to visit Cuttack Chandi Temple: The temple remains opened till midnight during the Durga Puja festival and hence that is believed to be the best time to visit the temple and receive the blessings of the Living Goddess, Maa Katak Chandi.