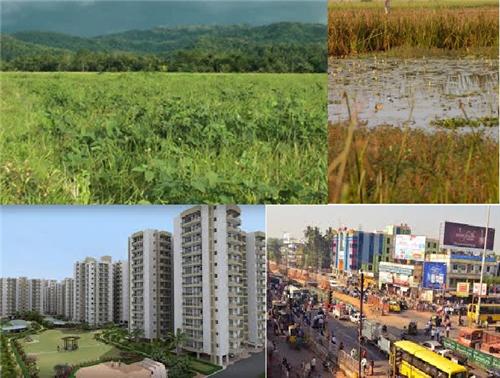 Odisha is an Agricultural based economy with more than 60% of its population involved in the agricultural activities. The rivers of Odisha are mostly rain fed, many a times it happens that the farmers have to be dependent on the irrigation and as a result of it major parts of the overall cultivated land are being irrigated.

The common crops cultivated in the districts and nearby villages are the Rice, pulses, oil seeds, jute, Mesta, sugarcane, coconut and turmeric. To serve the domestic requirements of the local people mainly the food crops are being cultivated. In the economy of Cuttack, cash crops also play an important role. Majority of the contribution to the economy of Cuttack comes from the cash crops only. Crops like rice and jute cultivated here are the most demanded in the national market and hence gives a great amount of support to the Economy of the silver city. Cuttack District ranks second in the entire state in the production of Jute and a Cuttack produces a major proportion of Rice in the entire state.

Factors that Affected Economy of Cuttack in Past

The most affecting factors which have shaken up the Economy of the entire Odisha are the calamities which have hit the state in the recent past. Cyclone, floods, droughts are the major calamities that has disturbed the entire economy of Cuttack by affecting the agriculture to a huge extent. The Cyclone which hit the coastal areas and the major agricultural areas last year has resulted to a huge loss in the agricultural economy of the State and Cuttack was not relieved though.


Steps by Government to Improve Economy of Cuttack

In the recent time, the improved irrigation facility that has been implemented in the planning period in order to meet the infrastructural demands has induced a booming progress in the economy of Cuttack in the following years.

With the formation of the governments of BJD (Biju Janta Dal) and Mr.Naveen Pattnaik being the CM of the state various schemes and plans were being formatted and launched for the betterment of the agricultural economy of the City and the state overall. The plans for profitable utilization of the hilly areas and the wasteland which are not conducive for the growth of the traditional crops, was one of the proposed plans by the State government in the recent years. This resulted in the inland hilly areas of Cuttack being major the location for the cultivation of rubber. The core benefit which is being derived from the rubber cultivation is that, it is being exported to various places in India and hence in return it returns a considerable amount to the economy of Cuttack.

In 1982-83 the Prawn Culture was assumed of a great significance in Cuttack which was then followed by the culture of brackish water prawn. In order to regulate the entire operation of the prawn culture in the state of Odisha Orissa Shrimp Seed Production Center (OSSP) has been established by the Odisha Government. Although in recent time, the prawn cultivation demands an important position in the Economic scenario of Cuttack.

Growth of the Industries in Cuttack