The Silver city of India - Cuttack is also known as the Cultural Capital of Odisha. As the major part of the population residing in Cuttack are the Odiya people yet there is diversity which can being seen in the festivals. All major festivals of all religion are being celebrated here with the same enthusiasm. As people of every religion residing in Cuttack from centuries it has been a spot to which one can call it a mini India altogether. 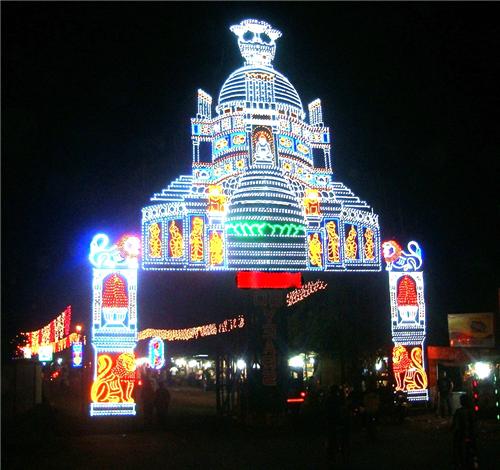 Dussehra is said to be the festival of Hindu Goddess Durga and it is the most popular festivals of Cuttack among all other major cities of Odisha. In Odisha Dussehra is known as Durga Puja and various pandals are being crafted on the streets and localities of the City where idols of Goddess Durga are being established and worshiped. The festival of Durga Puja is being celebrated ten long days where by the Medhas are being made designed in which the idols are being adorned along with huge amount of gold and silver. On the seventh, eighth and ninth day of the Durga Puja there are special worships being performed all over the city. Several people from the nearby small towns and villages visit Cuttack and the crowd of the city gets three to four times than that of the normal one. The whole city looks like a newly wedded bride and decorations of various forms are being done all over.

This is a festival that has its roots in the past. In earlier days the merchants of Kalinga (previous name of Odisha) use to travel to the South Asian countries for trade purpose. While returning from the foreign countries they used to buy several things which used to be sold in the Odisha market and there used to be the celebrations with merchants returning home. Of all the major foreign destinations Bali Island which is now a part of Indonesia was the major destination for the Odiya merchants where they used to go for trade. In the memory of this event every year the fest of displaying the Odiya goods, handicrafts, are being sold in the Bali Yatra festival which lasts for seven days. Many stalls of products related to the art and crafts of Odisha are being sold during the Bali Yatra fest. People from all part of Odisha and the neighboring state visit during the fest and celebrate it with joy.

Rajo is a 5 days festival which is being celebrated very enthusiastically all over Odisha but particularly in the districts of Cuttack, Bhadrak, Jajpur, Puri, Khorda, Nayagarg, Balasore, Jagatsinghpur and Keonjargarh. The main motive of the festival is to give rest to the earth which is being treated as mother as per the Indian Culture. No agricultural activity is being done during these days. This festival is mostly celebrated by the ladies and girls. Unmarried girls are restricted from touching the ground with bare foot. The girls enjoy this festival the most. All the domestic activities are being performed by the male members of the house. A variety of special food items are being made during the Rajo Festival and the entire festival is being celebrated with love and affection among the family members.

Just after the conclusion of the Durga Puja the entire city gears up for the Kali Puja celebrations. It is celebrated on the day of Diwali with bursting of firecrackers at the Riverside of Mahanadi which is known as the ‘Gada Gadia Ghat’. It is celebrated as the victory of the goodness over the evil powers and it also symbolizes tribute to the Goddess Kali.

Odisha is also a state of farmers. The major crop cultivated here are rice and grains. In the month of January the crop are being harvested and celebrations are being done in the rural areas of the state. In urban cities like Cuttack people celebrate it as the Makar Sankranti - a festival of Kites, where the sky gets occupied with thousands of colorful kites. Various kite-flying competitions are also being organized at the river bank of Mahanadi and Kathjori on that day.

Just like the Durga Puja, the entire Cuttack is being decorated with colorful lights and every corner, streets and road side have pandals where the idols of lord Ganesh are being established. Every year the Ganesh Ghaturthi is declared as a holiday for School and Colleges of Cuttack. And not just that Most of the Schools and Colleges also celebrate it with immense joy. Students all together gather funds and establish the Lord Ganesh’s idol in their Campus and worship it for three to four days.

The historic chariot festival known as Rath Yatra of Shree Jagannath Puri, is a world famous Odiya festival. To replicate it at various places of the state there used to be the similar Chariot festivals that are being organized where Lord Jagannath along with lord Balabhadra and Goddess Shubhadra travel from their native temple to another temple. After a stay of 9 days Lord Jagannath returns back to their native temple and at the last day the ‘Suna Besa’ is being done of the Lord Jagannath, where the idols of Lord Jagannath, Lord Balabhadra and Goddess Shubhadra are being decorated with several Golden ornaments. This Chariot Festival is being celebrated at Lord Jagannarth Temple at Dolmundai Square of Cuttack, which is situated at the heart of the city.

Islam is the second dominated religion in Odisha after the Hindu religion. Earlier in history, Cuttack was the capital of the Mughal Empire which ruled on the Odisha and rest of the country.  Also in the 15th century several Muslims migrated from the west Bengal to Odisha and settled here. Although the entire population of Odisha constitutes only 6% of Muslims and among them most are concentrated in Cuttack itself. This becomes a major reason for celebration of the Islamic Festivals in the city and some of the major festivals are Eid and Muharram. During this time all the Islamic community people gather at the famous Jama Masjid at Balubazar situated near the High Court of Odisha in Cuttack. On the occasion of Eid special shops get formed selling especially the Muslim food and sweet dishes.

Explore more about Culture of Cuttack