Lalitgiri is one of the earliest Buddhist Complex of 1st century AD and is also said to be the node of the Diamond Triangle which is formed by the Ratnagiri, Udayagiri (which is located in the Jajpur district) and Lalitgiri (which is located in Cuttack district). The recent excavations done at the Lalitgiri throw light on the important archaeological materials which makes Lalitgiri a great centre of Buddhist attraction. Being connected to the Silvery city, Cuttack and the state Capital of Odisha, Bhubaneswar with excellent roads Lalitgiri has turned out to be one of the best tourist locations and picnic spots of the state. 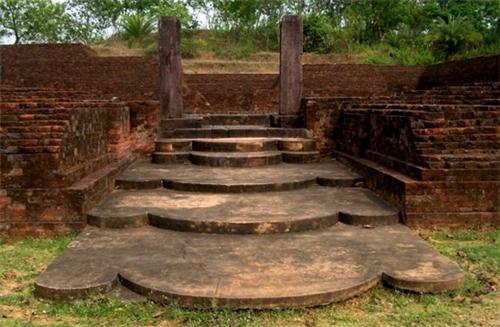 The remains of the Chaitya hall, regal ruins of the huge brick monastery, numerous votive Stupas and the renovated stone stupa located at the center of a small rugged sandstone hill are some of the special attraction of the Lalitgiri. Besides that the greenery all around the Lalitgiri adds a peaceful ambience.

There are several sculptures including colossal Buddha figures, many statues of Tara, giant Boddhisattva idols, Jambhala and a large number of Mahayana sculptures are the most amazing portion of Lalitgiri. All these sculptures have short inscriptions done on them.

The Statue of standing Buddha which has the draperies of a huge length reminds the persuation from the Gandhara and Mathura school of art. The sculptures and statues at Lalitgiri also reminds of the Prajana who had come from Takshasila to the ancient Odisha in order to learn the Yoga philosophy. From there he left in the 8th century A.D for China and took the utographed manuscript of the Buddhist text Gandavyuha which was with the king of that time, Sivakara Deva and gave it to the Chinese Emperor of that era, Te-Tsong.

The recent excavations done at the Lalitgiri reveals several interesting facts related to the presence of Buddhism in the state from an ancient time. The Langudi hills are worth watching at Lalitgiri. There are several Stupas which are cut out from rock that grabs attention of several Buddhists who visit here every year. The Buddha in Samadhi-mudra, The harmonic umbrella, the Cylin dome ans so many such sculptures and stupas present here have made the Lalitgiri on of the famous Buddhist tourist destinations.

Lalitgiri, A Part of Diamond Triangle

Lalitgiri also reminds the descriptions of the famous Chinese traveler Hiuen T'sang of 7th century A.D. about the sacredness of the glorious Stupa on top of a hill at Puspagiri Mahavihara. The Langudi hill in the Jajpur district might be recognized as Puspagiri as per the archaeological materials which also includes the inscriptions bought into the light by excavation.

Importance of Lalitgiri for Buddhism

With the discovery of caskets comprising of the sacred relics which are believed to be of the Tathagata himself from the Stupa at the top of the hill at Lalitgiri, strengthens the sacredness of the Stupa and also enhances the holiness of the Lalitgiri among the Buddhists all across the world.