Cuttack has been one of the major seats of the political authority of the Muslims who ruled it once. And for that reason many Muslim monuments have been constructed in the city of Cuttack during their rulings. Qadam-E-Rasool is one of those beautiful monuments of the state which as per the historical evidences was built by Shujaddin Khan. 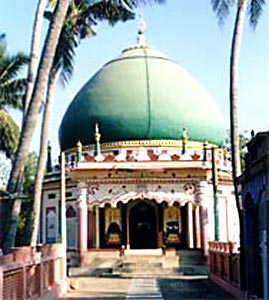 Qadam-E-Rasool is one of the famous Mosques of Cuttack which is spread on an area of over 57 acres. The mosque is of great importance for the Muslim community of Cuttack as it has its roots in the 18th century A.D and has witnessed the steps of Prophet Mohammad in the mosque which has been preserved till date in the mosque’s central hall. It is a prime example of the magnificent Indo-Islamic architecture and is said to be one of the most famous Muslim graveyard which has graves of several Nazis. There is a common belief among people that the holy shrine of Qadam-E-Rasool has been made by a Hindu King and is visited by both Hindu and Muslims.

The Qadam-e-Rasool shrine is stretched over half a square mile and consists of three mosques and a music gallery named as Nawabat Khana. On each of the corners of the boundary walls of the Qadam-e-Rasool there are the small minarets being formed. At all the four corners of the compound wall of the mosque tiny but very strong towers are being constructed which are carved out of the chiseled stone. Overall the entire mosque has nine minarets and a big one right at the center which holds the crescent and the star. There are several examples of fine architectural works on the entire mosque which can be seen increasing its beauty. In the state of Odisha there are several shrines and among all the holy Qadam-e-Rasool has the huge building which stands on an octagonal plinth.

The interior roof of the mosque has been painted with designs of beautiful flowers and plants of various varieties. The mosque has complete marble flooring with black and white squares. Just at the centre of the entire monument the footprints of holy Prophet which is the Qadam-e-Rasool are being placed in a metal basin. The peak of the dome is structured just like the Sikhara temple architecture of Odisha with all the elements of amalaka and the kalasa. The dome outside is ornamented with a golden top.