Cuttack is the only city of the state that witnesses some of the major international sports events, due to the presence of some of the world class sporting destinations in the city. 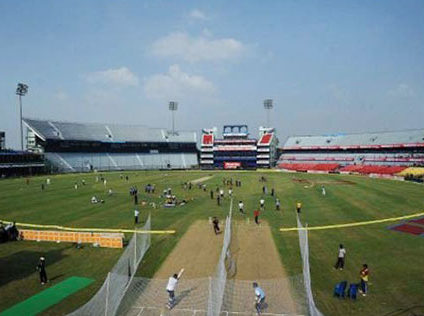 The Sports & Youth Services Department, Government of Odisha has taken various steps in gaining excellence in Sports & Games as well as promotion of Youth activities in the entire state. The Sports & Games of today are a way of being a professional and has completely replaced the ideals of amateurism. There are several sportsmen of International standards the city of Cuttack has produced.

Department of Sports and Youth Services, Govt. of Odisha had announced various welfare schemes for sports persons and for development of sports in the state. There are various destinations for the residents of Cuttack to get acquainted with all type of sports and physical activities.

Present right at the heart of the city it is an important venue for many cricket matches from the day it has been constructed. The third one day international match played in the history of India was played at Barabati Stadium.

One of the finest indoor stadium in the east India with centralized air conditioner courts for various games. With the capacity of 10,000 spectators the Jawaharlal Nehru Indoor Stadium has been a venue for several domestic, national and international level games and sports.
Address:
Biju Patnaik Colony
Cuttack, Odisha 753008

Cuttack has a branch of Sports Authority of India (SAI) training centers, which was established on 26 March 1987, under Sports Hostel Scheme at Barabati Stadium, Cuttack. Government of Odisha has provided accommodation facility at Barabati stadium for boys and at Jawaharlal Nehru indoor stadium for girls. The center gives training for athletics, basketball, football, volleyball, and gymnastic. There is a quite nice athletic track at the Satyabrata stadium, near Barabati stadium.

There are several other sports ground and clubs all across the city, to name a few, Satyabrata stadium, DRIEMS cricket stadium at Tangi, Snushine field near High Court, Ravenshaw ground, SCB medical ground and many more. Cuttack was the host for the 18th and 24thNational Games which were held in 1958 and 1970 respectively. The Ring Road (that surrounds Cuttack) along rivers Mahanadi and Kathajodi is a popular (and safe) morning-walk route for the residents of Cuttack.

Following are the sports clubs in Cuttack city, where you can indulge into many sports under expert guidance and coaching: