Cuttack being one of the oldest cities of India it is also known as the cultural capital of the Odisha. As the entire state is famous for its culture and heritage which is being preserved since centuries it attracts many tourists from across the world to visit Odisha every year. Odisha is also a state known for its natural beauty that includes the beaches, mountains, hills, landscapes and many more such tourist attractions the entire state is blessed with. From the ancient time Barabati fort to the modern day Barabati Stadium and from the traditional handmade and crafted silver ornaments to the Modern yet traditional hand-looms of Boyanika, Cuttack has all that easily drives any visitor to visit this holistic destination. 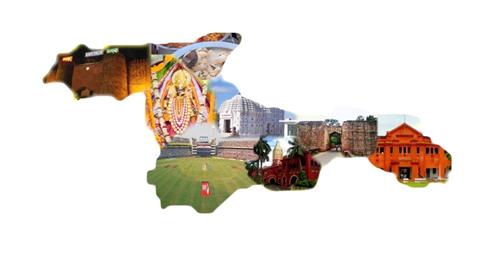 The temperature of Cuttack is believed to be affected many of the times by the presence of the Bay of Bengal, as in summer often depression gets created in the deep sea causing untimely rain, yet the weather is tropical most of the times. In summer the temperature remains 45 - 19°C and in winter it turns out to be 22 - 04°C. October to March is the best time to Visit Cuttack as it the time when the entire city gets into the festive mood and the level of enjoyment reaches its peak.

The most common medium being used to travel around the city are the Rickshaws, Auto rickshaws and the town buses. As Cuttack is an unplanned city the locations to visit in the city are at various corners of and can easily be covered by hiring private cabs.

Eating Out in Cuttack

The food mostly being preferred by the local men of Cuttack are basically the food available on the streets and road side of the city. Even today many reputed people step down to have these yum foods and one can easily find a celebrity or a political having these street foods at any day. Of the all Dahibada Aaludum are the most favored dishes of the Cuttackiaas, followed by the Chaat, Rosogullas and many such dishes are well known in Cuttack.

Cuttack is said to be the home for several handloom industries of the state. Boyanika is one of the oldest and famous handloom showrooms since decades. Several other famous shopping loctions are there in cuttack including the Big Bazaars, Bazaar Kolkata, Mall – a – Mall, Raymond outlets and several other franchise outlets are also there in Cuttack. There are several wholesale markets also available in Cuttack offering goods at very low prices hence Cuttack is one of the famous location for the merchants from all over the state. Cuttack is believed to be the one of the famous market for the Gold and Silver ornaments of the State. The artisans of the state have the expertise to craft some of the best designs from silver and gold. Decorative products such as jewelry boxes made of lacquer are decorated with delicate motifs and are very famous in Cuttack.

Cuttack is blessed with some of the most colossal architectural excellence. The monuments of Cuttack are major attractions being worth as many words of adoration as possible. A fort, temples and tombs, every monument tells a thousand tales about the historical past and the legends associated with the city.

Some famous ones are listed as under:

Situated at the heart of the city Barabati Fort, built by the Ganga dynasty on the bank of the Mahanadi is said to be the most amazing monuments of the State.

A bunch of green domes located right at the heart of the city Quadam-I-rasool is a sacred place for Hindus as well as the Muslims. The 18th century shrine of Quadam-I-rasool is the home of the footprints of Prophet Mohammed made on a circular stone present in its innermost mosque.

The temple dedicated to Lord Shiva is located on the outskirts of the town and is famous for its water hole (Ananta Garva), which floods the sanctum sanctorum on holy occasions.

Parks and Gardens in Cuttack

The gardens of Cuttack have been offering splendid sights of nature in purest of forms. Seeking a fresh gasp of air, you can anytime drop in here for instant relaxation and rejuvenation. The persistent plans and efforts by the government have come up with some successful projects like Deer Park, Biju Patnayak Park, Jobra Park, CDA Bidanasi Park and many more.

Cuttack is a place that has witnessed several kingdoms ruling over it in the past and has also been a part of the revolutionary Freedom fight of the country. The memories of all these along with several other specialties the tourism department of the state has brought up various Museums in the city. Netaji Birth Place Museum and Odisha State Maritime Museum are the most famous museums of Cuttack which are known across the country.

Cuttack is a much diversified place with its population constituting people from all over India. This directly has an impact on the local areas and the places that has the majority of people following a similar religion. Cuttack has a plethora of religious monuments and institutions in the city that are big attractions for tourists.

Some of them are Cuttack Chandi Temple, Panchamukhi Hanuman Temple, Juma Masjid, Gurudwara Daatan Sahib and many more.

Cuttack is one of the great tourist destinations of Odisha, with numerous attractions. Every year thousands of tourists visit the place from every part of the globe. They come, stay, explore, enjoy and bid bye to this place, carrying lovely memories and a promise to self that they will be visiting here soon. There are several hotels and lodges in Cuttack providing some excellent services for the visitors.

Some Quick Facts about Cuttack

Clothing: Clothing in Cuttack is mostly the light cotton outfits in summers and light woolen ones in the winters as mostly the weather of the city is humid.

Languages spoken: Cuttack being the most diverse cities of Odisha witness people of all religion and castes. Languages that are mostly being used across the city are the local Oriya language along with Hindi, English and Bengali at several corners of the City.